There is a simple task, to prepare a small piece of hardware for various radio experiments and work with different SDR receivers. Ubuntu Mate 18.10 will be used as the main operating system. I chose it because of the minimalism of the graphical interface and its normal operation in HiDPI-mode.

As a piece of hardware will be used the old Intel NUC NUC5i5RYH: 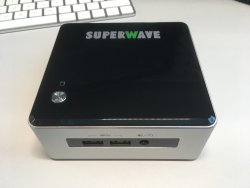 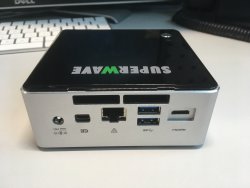 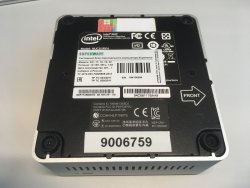 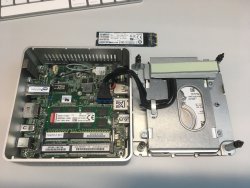 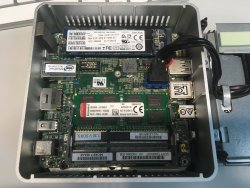 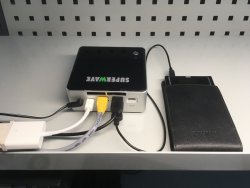 I didn't choose this computer, it was given out at work for house experiments. But as it turned out, it has a number of undoubted advantages. First, it is undoubtedly small size and light weight. Second small energy consumption and omnivorous in terms of voltage. The input can be supplied with any voltage from 12 to 19 volts. At home the computern is powered by a power supply Manson SPA-8330, which is set to a voltage of 14.6 volts. And at the exit is fed directly from a LiFePO4 battery (25Ач, the output voltage ~14 volts). You can even power from 18-volt Bosch batteries (on a 5-amp battery from the screwdriver, the computer worked for 5 hours, while 2 SDR receivers AirSpy mini and one rtl-sdr were connected, which all this time were loaded to the maximum).

We will configure a computer thus:

The idea is - when we turn on our computer at home - automatically runs VMware ESXi and runs a virtual machine Ubuntu from Samsung SSD. And when we go away, Ubuntu will run directly without a hypervisor.

The simplest solution is to install VMware ESXi on a USB flash drive and then connect it at home when you need to boot into the hypervisor. The solution is simple, but in my case is not suitable. For normal operation of SDR receivers in a virtual machine in VMware ESXi, it is necessary to passthrough the entire USB controller to the virtual machine, and not separate USB devices, otherwise rtl_test and airspy_rx showed data loss. And if we load VMware ESXi from a USB flash drive, then we will not be able to passthrough the USB controller to the virtual machine. Therefore, VMware ESXi is installed on SanDisk SSD.

For a convenient change of boot Ubuntu / VMware ESXi, configure the boot in the BIOS so that the default boot was from the Samsung SSD, which is installed Ubuntu. Also included in the BIOS item Boot USB Devices First, so that when you connect a bootable USB-flash, the boot was from USB. 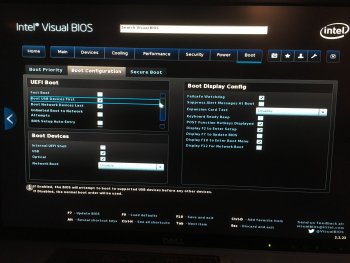 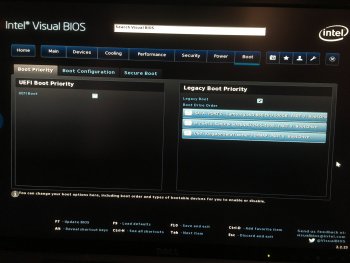 Next, prepare a USB drive with grub bootloader and configure it so that it boot VMware ESXi from SanDisk SSD.

Now if the computer is turned on without a special USB-drive – Ubuntu will be automatically loaded from the Samsung SSD. And if we connect a special USB-drive with grub and turn on the computer - the booting will start with a USB-drive, then grub will boot VMware ESXi from SanDisk SSD, and then autorun in VMware ESXi will boot our Ubuntu in the virtual machine from Samsung SSD.

There is a question, and why in general to grow a garden with VMware, it is possible to boot simply Ubuntu and to work with it? VMware is useful in that, first, in addition to Ubuntu, you can install other operating systems for experiments. And secondly, you can connect to the same Ubuntu via VNC not at the operating system level, but at the "hardware level", with access to the bootloader. You can also run this virtual machine from different iso files. Since I do not have a monitor in my workshop to which you can connect a computer, these VMware features periodically help out.